“You choose to be hurt rather than hurt others, right? You’re nice and wonderful. But while it seems like you’re choosing both, you’re really forsaking both.” 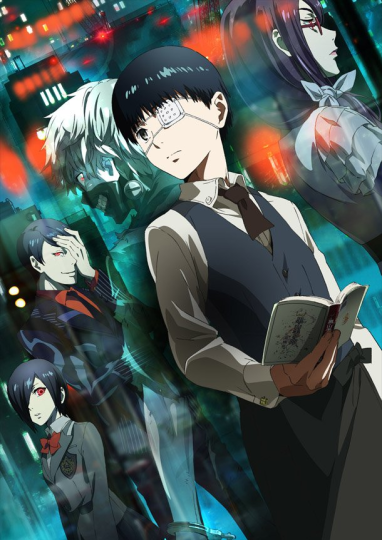 Tokyo Ghoul is set in an alternate reality where ghouls, individuals who can only survive by eating human flesh, live among the normal humans in secret, hiding their true nature to evade pursuit from the authorities. Including enhanced speed, senses, and regenerative ability, a regular ghoul is several times stronger than a normal human, has a skin resistant to ordinary piercing weapons and has at least one special predatory organ called a “Kagune”, which it can manifest and use as a weapon during combat.

The story follows Ken Kaneki, a college student who barely survives a deadly encounter with Rize Kamishiro, his date who reveals herself as a ghoul. He is taken to the hospital in critical condition. After recovering, Kaneki discovers that he underwent a surgery that transformed him into a half-ghoul.

And his journey as half-human and half-ghoul begins. A life from the normal to the paranormal.

I enjoy this anime quite a bit. It has an interesting premise and characters focus. Bloody good fights have been split over the course of the series though there are some brutal and nasty scenes along with it.

I like the beautiful kagune of the ghouls. While it sprouts from the back of them and before they started to attack, they look like a fallen angels. Tokyo Ghoul didn’t  disappointment me. I have watched the season 1 and will be watching the next season too.

A Place for Healthy Living and Creative Learning