THE BOY and THE BEAST (Bakemono no Ko) 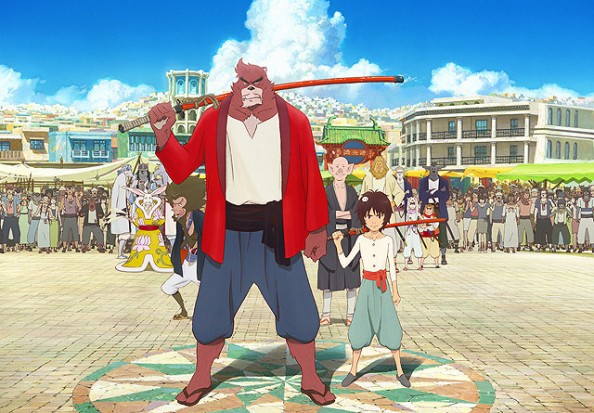 “Nine-year-old Ren has recently lost his divorced mother. With no news of his father and refusing to live with his legal guardians, Ren flees into the streets of Shibuya. Ren steals some food and sleeps in an alley, reminiscing about the aftermath of his mother’s funeral.

In the Beast Kingdom, the lord has decided he will retire in order to reincarnate as a deity and names two potential successors: the popular Iōzen, who is also the father of two children, and the powerful Kumatetsu, who is lonely and lazy. The Grandmaster suggests that Kumatetsu find a disciple in hopes of inspiring him to succeed him.

While wandering the streets of Tokyo with his makeshift companion, Tatara, Kumatetsu meets Ren and suggests that the boy becomes his disciple. Though Ren is fiercely opposed, he follows Kumatetsu back to the Beast Kingdom out of curiosity but is unable to go back to the human world. As he watches a battle between Iōzen and Kumatetsu, Ren is impressed with Kumatetsu’s persistence despite the lack of support from onlookers. When Ren cheers for him, Kumatetsu is easily defeated. However, the Grandmaster declares the actual duel of succession has not come yet.”

A ton of comment I have read with disappointments, some are comparing Mamoru Hosoda’s previous work like The Girl Who Leapt Through Time and Wolf Children. I would agree with the approach of this movie is a little different too compare, but hey, I liked this one too.

This film has its own charm and beauty. I find the visuals like an old-school series which makes me more like it.  Though the flaws are undeniable, I liked it and had some fun, thanks for the little humor and the beauty of the relationship between the two main characters.

Still, I would recommend this anime movie to watch without so much expectation.

Latest books and Technology|Monthly reviews on movies and webseries|Podcasts |Web design|Tips on YouTube & etc...|I will Post on Monday, Thursday and Saturday 😊