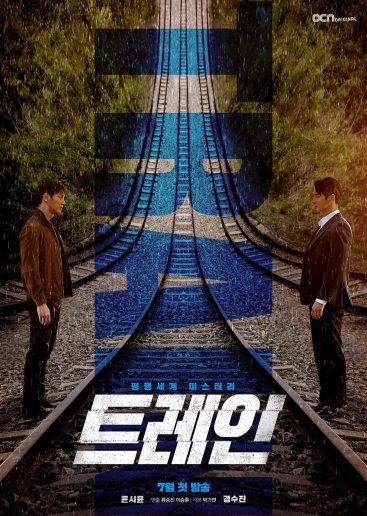 A man lost a precious person because of a serial killer. He crosses over into a different world to figure out the truth behind her death. Seo Do-won (Yoon Si-Yoon) is a detective and he is enthusiastic at his job. Han Seo-Kyung (Kyung Soo-Jin) is a prosecutor with an honest personality. Lee Jung-Min (Shin So-Yul) is a member of a scientific investigation unit. They’ll do whatever it takes to track down the killer in one world and protect his love in the other.

Despite the difficult concept of a parallel universe, this drama is well written and not monotonous. You can sense a complex idea, but it wasn’t confusing at all. The delivery of the story is consistent and sensible. The switching of two worlds is uncomplicated, you can distinguish each world by their transitions of color tones. Also, it has only 12 episodes, just the right amount to solve the puzzle without noticing some of its flaws.

Train is very intriguing, unpredictable, and carefully crafted drama, that’s why I like it. They focus mainly on the story and it never falls off the track. The elements of twists and mysteries are crystal clear, everything is interconnected. The pacing is stable, the cinematography is noteworthy and acting is effectively executed. Don’t be concerned about the romance, it never overshadows the suspense and murder of crime-solving in this series. It has a balance of everything.

I give it 9/10 because there are emotions from one of the characters I failed to connect and one hole that left me to wonder. Nevertheless, this drama is recommendable to watch.

mendingfelicia.wordpress.com/
Forty Something Life As We Know It

Life is a journey

I speak my heart out.